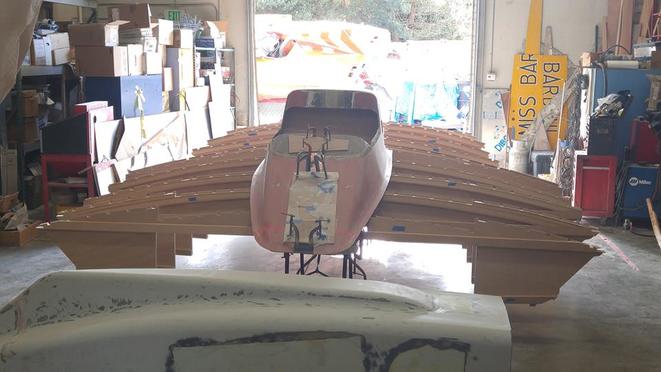 In this weeks update, Bob Steil was on hand at the annual Hydroplane & Raceboat Museum's season kickoff event............Hydro Fever this past Saturday.

As the Squire Shop crew continued working on the hull (even with all the distractions around them), Tim Ramsay asked Bob to "lend a hand" in gluing up the engine stringer for vacuum sealing. As you can see in the pictures below, Bob had a blast "helping out".

The team decided to make a mockup that morning for the crowd that would be attending the event to see the progress they had been making. And for the first time, we had the rough shape of a boat taking shape before out eyes.

The team is making the final preparations to prepare for the jig, and things will really get interesting once that happens. We should be getting those parts from Detroit this week sometime as well, and I'll post pictures once we get them.

Were always looking for extra volunteers as well, so drop on in and you can experience this awesome ride along with us............no worries, we'll guide you along the way.