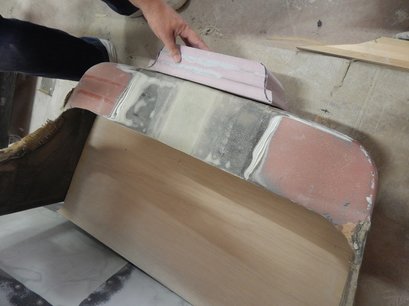 I apologize for the lack of updates the past two weeks, as I haven’t been able to make it down to the museum due to a back injury recently. However, I’m doing much better now and I now have more news to report.

In regards to the stabilizers and gearbox we recently obtained from David Bartush, Warner Costin safely delivered them to the Miss Madison team this past weekend. Dan Hoover and his team were gracious enough to transport them from Madison over to Tri-Cities for the upcoming spring test session in early June. They will then hand them over to the museum folks, who will also be there testing the newly restored Pay N’ Pak.

The team accomplished a major milestone this past Tuesday, as ALL the frames have now been completed………….next step is that we build the jig to begin hull assembly. By the end of the month, we should have a basic hull skeleton in place…………it will start to resemble a hydroplane shortly.

Brad Haskin has been plugging away on the drivers cowling, having successfully widening and repairing the rear section. Brad is now working on replicating the headrest section, which starts as nothing more than sculptured foam. Once a jig can be built to simulate the front of the deck, Brad will then repair the front section of the drivers cowling to match the deck profile exactly. 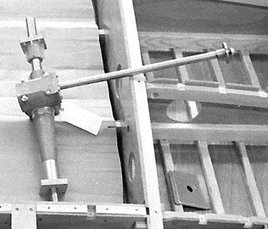 I personally removed the last remaining stabilizer skin from the U-7 Thor incarnation, which I will admit was a challenge. Once I had both inner frames separated, I began the tedious task of cutting loose the welds for the attachment parts (deck pivot brackets and horizontal stabilizer mounts). These parts were original to the Squire Shop, so we are making every effort to salvage them. This will take some time to do, and will likely have to heat it back up to help separate them again.
​
We are also trying to track down a Casale steering box, which is what the boat used when built originally. If anyone out there knows where to find one…………..by all means, let us know.
​On a side note, Ron Tully created a special print of the U-7 Thor Racing hull as it looked in its last version prior to the restoration.

This was made for the last owners of the hull prior to being donated to the Hydroplane & Raceboat Museum this past winter.

There is also a small photo gallery below, and a quick video as well.

Until next time……
​
Gary

Note: Both artists renditions are the sole property of Ron Tully, fyi.