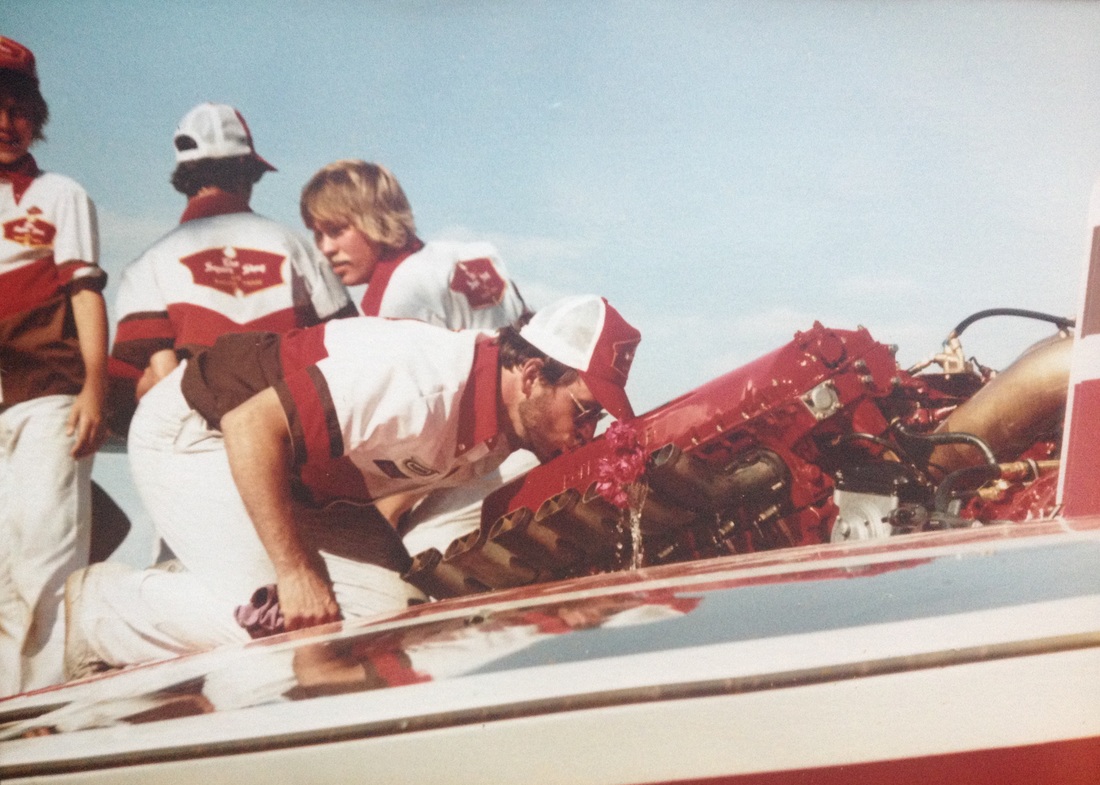 I spoke with former crew member “Doctor” Don Beyer recently and he shared with me the following story. I will do my best to describe it as accurately as possible, but I’m going off memory here from that conversation.

I apologize if there are inaccuracies in this story, but I will do my best.

As the team was headed to their next race in the Tri-Cities (Washington State) in late July of 1981, The Squire Shop team brought with them 3 engines for the weekend. After damaging their primary one early on during the weekend, and then soon afterwards damaging the other two engines as well along the way……..…the team was in need of another motor………and fast. Of the three that were damaged, the crew quickly took to trying to make one working engine out of the parts that were still usable…….but they also needed another spare, just in case.

There was such a motor still available in the teams arsenal, but it was at the team shop in Seattle (Squire building, across from modern day Century Link Field). This motor was reduced to being used only as a “test” motor and was NEVER intended to be used in the boat during a race. It was strictly a engine created from parts that were still salvageable, but were declared unfit for an actual racing motor.
​
This “test” motor was given the nickname “ACNE” by the crew, due to its questionable parts qualities and extended/overused lap usage hours. I was told that this motor was used for over 60+ laps, but it still “technically” worked. The team had decided to make the switch to Bardahl brand oil due to recent engine failures from the previous Pennzoil brand, and they desperately needed a motor that would hold together……regardless of its condition.

The decision was made to travel back to Seattle from Tri-Cities to pick up the motor so the team could use it for Tri-Cities just in case they needed it. The challenge was trying it put it into a horse trailer so they could get it back to the pits in time, while it was to be hauled back by a beat up motor home.
The trick was to find a way of getting it inside the horse trailer, as a crane was not an option due to the trailer having a roof on it. But as Don put it to me, they “found a way” and got it done……with some “help” from an old Volkswagen Beetle that also acted as a “tool” to push the engine into the trailer.

“ACNE” was put into the boat and it stayed together enough to surprisingly qualify for the final heat (July 27, 1981). The crew asked Chip Hanauer sometime before the final heat if he wanted them to change the motor out and put in the other one, which the crew felt was a much better engine and gave them a more realistic chance at competing against the Atlas Van Lines and Miss Budweiser teams.

Chip made the decision to stick with “ACNE” one more time and let fate decide what would happen next. Although the crew didn’t object to chip’s request, they simply smiled and “went to lunch”.
​
“ACNE” remained in the boat for the final heat and everyone hoped it wouldn’t blow up during the process.

Now most every hydroplane fan out there knows about Chip’s “come from behind” victory a year later at the 1982 “Gold Cup”, right? This is where Chip sneaked up on Dean Chenoweth in the “Griffon” Miss Budweiser (driving the Atlas Van Lines) in one of the more dramatic and exciting final heats of all time.

Well, this sort of happened in simular fashion a year prior in The Squire Shop…………….but on a less  “glorified” scale than the 1982 version. Chip basically did the same thing here, except he also had Bill Muncey to contend with as well.

Don tells me that he installed 6 bottles of Nitrous Oxide in the boat and that Chip used every drop in that final heat. After Bill Muncey and the Atlas Van Lines went dead on the race course due to engine failure of their own, Chip set his sights on reeling in Dean and the Miss Budweiser. And at the last few seconds of the final heat, Chip snuck out in front of the unsuspecting “Griffon” Budweiser and claimed the victory!

The ironic part of this is that the “ACNE” motor blew a head gasket just as it crossed the finish line and the boat had to be towed back into the dock. The motor had indeed blow up as expected, but it did so AFTER it had claimed the victory for The Squire Shop team.

Here is a picture of Don kissing “ACNE” immediately after the win, with Larry Stenbakken in the background (blonde hair). Brenda Jones had brought some flowers over to the team as a salute to the teams accomplishment, which were then placed into the exhaust…………………and you can see the water pouring out of the engine in the picture if you look close enough.

So for a motor that had no business being in a hydroplane……..let alone in actual racing conditions……………..it proved that it had one last hurrah left in it.

The little engine that could, somehow found magic in a bottle………..if only for that one special moment in time.
Ahh………….good times indeed.
​
Gary


Here's a link to the actual story of the race itself.
http://www.tri-cityherald.com/sports/other-sports/hydro-racing/article31739562.html
Powered by