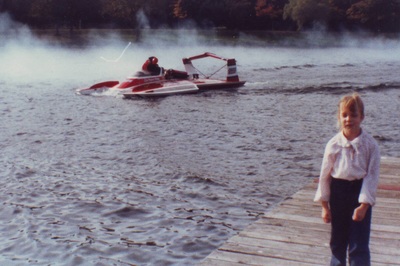 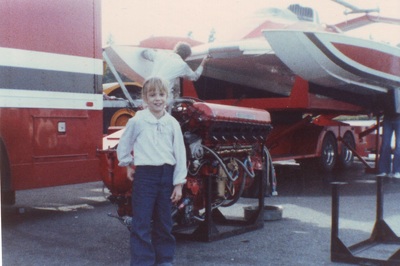 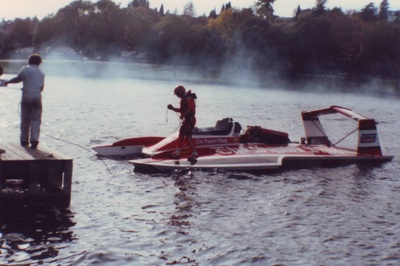 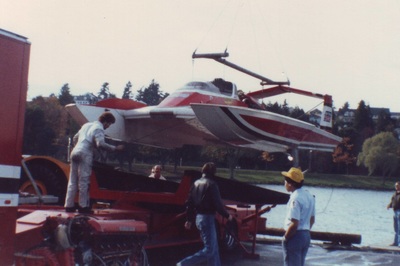 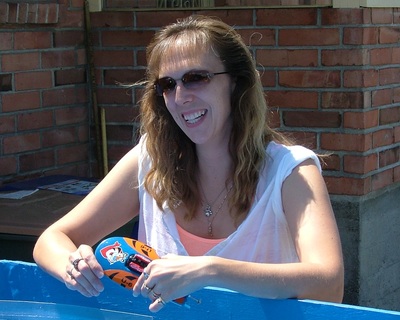 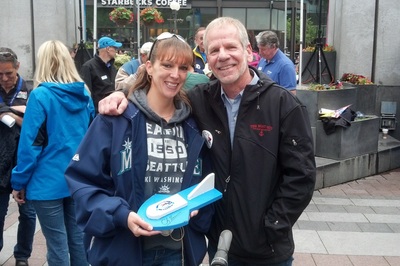 This is Gary Laws (one of the members in the ownership group, and webmaster for this website), and I'd like to tell you all about it.

I love this story, no matter how many times I hear it….. it never get’s old. I often imagine what this must have been like back when it actually happened; secretly wishing it had been me instead of her that day. It's so unreal, it had to be true. This just goes to show what a great guy Chip Hanauer is, and how he appreciates and cherishes his fans. I don’t know if Chip offered what I’m about to tell you to anyone else, but this is an amazing…….yet simple story. I will try to explain what transpired as accurately as possible, but this all happened many years ago. I'll tell you all the way it has been told to me, directly from Kristy and her mother Carol directly (who are also members of the ownership group as well).

The date was October 16, 1980 at Stan Sayers Pits in Seattle, my wife Kristy is 6 years old at the time. Chip is out testing the Squire Shop on Lake Washington, getting ready for the upcoming racing season. Kristy and her parents live only a couple blocks away, so once that V-12 Rolls-Royce Merlin get's fired up............they anxiously head on down towards the lake to see which boat it is.

Now you can imagine how loud and scary this must all be to a little girl back then, quite intimidating actually……this wasn’t a whispering turbine. Something about a V-12 shakes the ground underneath you, it’s power sends chills through your body when it roars to life.

Kristy and Carol arrive in time to see Chip and the Squire Shop on the water doing some test runs. At some point during the test sessions, Chip heads out towards the boat to take it out for another run. As he approaches the finger pier, Chip spots this shy little girl (standing beside her mother) curiously watching in awe and amazement. Chip then detours and walks straight over towards her, as if her innocence caught his attention. Chip then greets her and asks if she liked the boat, which Kristy replies a timid “yes”. After some more small talk, Chip does the unthinkable..................he asks her mother if it would be ok if Kristy would like to go for a ride in the boat?

Are you kidding me?

A ride in an unlimited hydroplane…… really?

............and Chip was completely serious, at least that's how those who witnessed it describe it.

Here's where the story breaks my heart………… this little girl was too afraid, and quietly said "no"…….. Kristy was just too frightened to do it. Chip then brings her over to the boat to check it out, to get a closer look at it. Chip tells her that he wouldn’t go very fast, but she would have to wear a helmet to ride along. He shows it and a life jacket to her and states that’s it’s way too big for her, but she would have to wear it anyway. Chip asks Kristy a couple more times trying to persuade her, but Kristy’s answer remains the same. Chip then smiles, says his goodbye’s and heads out for another test run. Kristy often tells me that she really wanted to do it at the time, but it was just too scary. Who could blame her though, right?

Again, remember people..........she was 6 years old when this occurred. I'm sure Chip would have just done a slow parade lap, or a loop through the infield or something………but what an amazing opportunity it was. Kristy regrets it to this day, and every Seafair that comes and goes.............this story is told and retold all over again. She feels very honored and proud to have been asked that day, it’s just unfortunate that she couldn’t accept Chip’s offer. Kristy still has the pictures taken of her that day with the Squire shop in the background as Chip is coasting back to the dock. It’s unclear if this was taken before or after Chip’s offer, but it was a special moment captured for all time.

And now you too know how it all began.